‘Is Sake gluten free?’ It’s the key question for people with gluten intolerance or celiac disease. However, as gluten free diet is not very known in Japan, the true information can’t be easily obtained.

We googled ‘Is Sake Gluten Free’ to be astonished that many websites said totally different things. Some say ‘Sake is not gluten free as Koji, one of the Sake ingredients, is grown on miso which is made with barley or soy.’
OMG. Where does this info come from? The above quote is totally wrong (we’ll explain why below)! Here, we’ll give complete answers to the question ‘Is Sake Gluten Free?’ The answer is NOT ALWAYS. 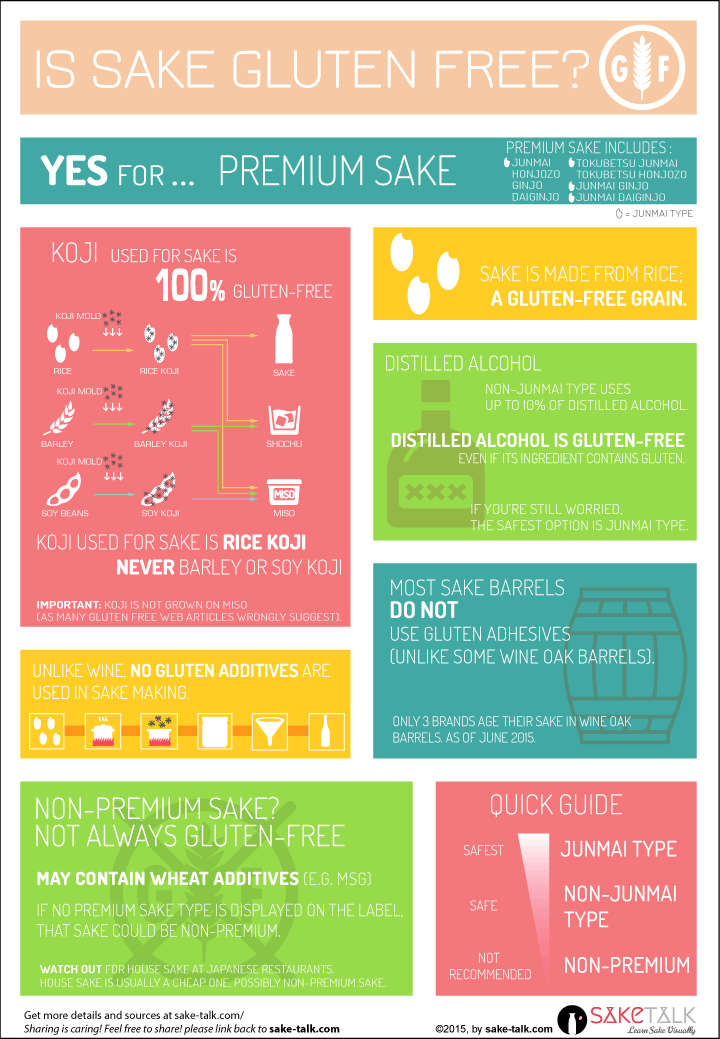 So is Sake gluten free? The answer is:

Premium Sake is the 8 types (grades) of Sake that meet the strict regulations and criteria. There’re five reasons why premium Sake is gluten free. There’s no gluten in Sake ingredients (Reason 1 to 3), nor is it added in brewing process (4 & 5)

As you already know, rice is one of the main ingredients of Sake. Rice is a naturally gluten-free grain as Celiac Disease Foundation confirms.

First of all, you have to distinguish Koji mold from Koji.

Koji: Rice, barley or soy with Koji mold grown on it. For Sake making, only Rice Koji is used. No barley or soy. Ever. It’s legally required to use only rice Koji for making Sake.

I would be very eager to try any Sake that were made from Barley Koji or Miso Koji. Well, if there were to be one, that would be categorized as a liquor, not Sake.

Miso is made from Koji that’s grown on rice, soybeans or barley, so ‘Koji enzyme grown on Miso’ doesn’t exist. it’s just out of question.

Non-Junmai type of Sake uses up to 10% of distilled alcohol to adjust flavors and aroma.

Celiac Disease Foundation states that distilled alcohol does ‘not contain any harmful gluten peptides even if they are made from gluten-containing grains. Research indicates that the gluten peptide is too large to carry over in the distillation process, leaving the resulting liquid gluten-free.’

Also, the main ingredient of distilled alcohol used for Sake is mainly sugarcane. Sometimes it can be sugar beet, sweet potato, rice or corn – they are all gluten free food.

Distilled Alcohol used for Sake is almost 200 proof alcohol (close to pure ethanol) – very little space for other elements to be included in it.

Having said that, sensitivity to gluten may vary with people. If you’re still worried or have had a reaction to any other distilled alcohol beverages, you may want to opt for Junmai Type. Junmai type does not contain distilled alcohol.

4. No gluten additives are added in brewing process

Wine can contain gluten as wheat gluten may be used in the winemaking process. Sake is made in a similar way to beer, and no gluten additives are used.

Oak barrels of wine may use wheat flour paste to seal its croze. Sake is aged at the brewery for a few months in tanks or bottles. Sake is stored in barrels when used for ceremonial purposes.

Those barrels are sealed with bamboo nails or without anything. Adhesive agents may be used for some Sake barrels, but they do not contain any gluten elements.

However, there recently emerged a few Sake brands that are aged in wine oak barrels. Just a few; only 3 brands as of June 2015. Azumaichi, Jokigen and Mikotsuru are the three.

Futsu-shu is cheap, non-premium Sake that is not categorized in Premium Sake Classification. Unlike premium Sake, Futsu Shu can contain a lot of additives and flavorings that are not even fully described on the label. The additives may include MSG (flavour enhancer). White wheat may be used in MSG, hence refrain from non-premium Sake if you’re a gluten-free dieter.

Premium Sake states on the label which type of premium Sake it is. Types are:

Any Sake without any of the above type written on the label is non-premium Sake.

Especially, watch out for house Sake at a Japanese restaurant. House Sake is usually a cheap one and can be non-premium Sake. Ask a waiter what type their house Sake is.