Is Sake fattening? Does Sake make you fat? It’s a big question especially if you’re health conscious or on a diet.

Whether calories or carbs make you fat is controversial, so we won’t say which one you should look at. However, alcohol beverages are digested and metabolized differently than food. That’s why you should not drink Sake too much if you don’t want to get fat! 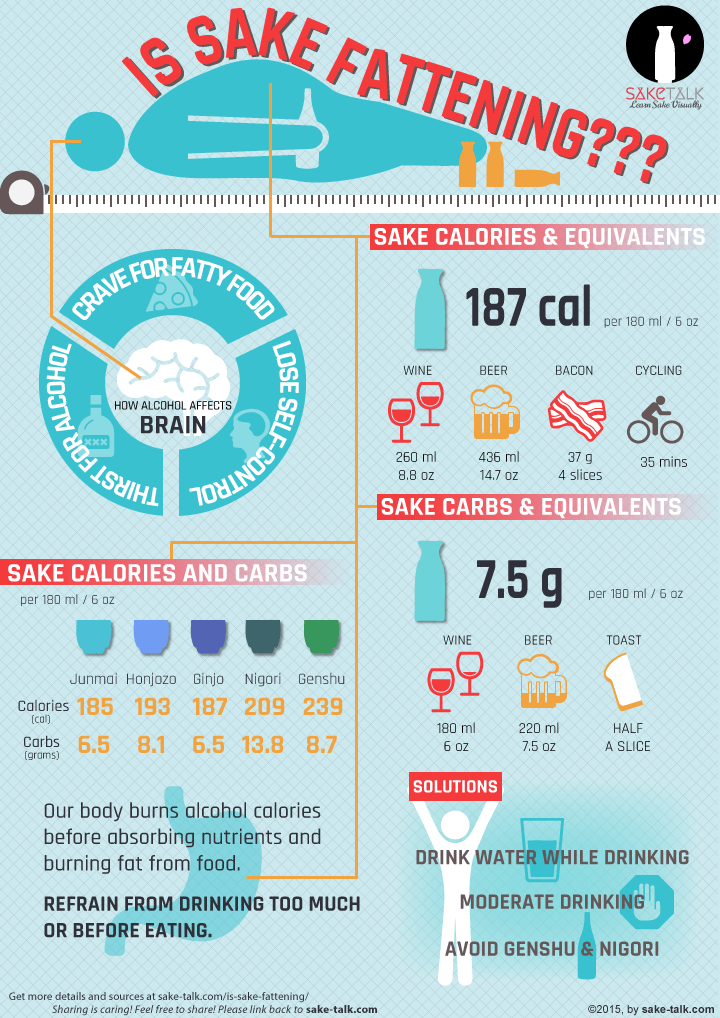 So a quick answer to this question; ‘Is Sake fattening?’ I would say ‘No if you enjoy Sake healthily’. But Sake can be fattening, depending on how you drink.

Anyway, the following is the detail!

As we’ve explained in more detail the Sake Calories previously, Sake calories are 187 cal on average. This information is from Japanese Ministry of Education, Culture, Sports, Science and Technology, and National Tax Agency.

Sake calories are higher than wine and lower than beer. To compare Sake calories with other drinks, check out our Sake Calories page.

Nigori zake (Cloudy Sake) and Genshu (undiluted Sake) are higher than other types of Sake. This is because:

Sake carbs are 7.5 g. Higher than wine and lower than beer. This is because Sake is made from rice.

Just like Sake calories, Nigori zake and Genshu have higher carbs than other types of Sake. The reasons are the same as calories. Maybe you should stick to the normal type of Sake if you’re body-conscious!

But Sake carbs and calories count doesn’t tell the whole story. Alcohol is digested differently and also affects your brain in a way that makes you fat!

How Drinking Affects Your Brain

We all know that fry-ups and takeaway food look so appealing after drinking. Why? A research in the UK [1] came up with an answer. Appetite is controlled in the hypothalamus. And alcohol triggers this part of the brain into action – making us crave for high calorie/carbs food.

If you eat fatty food, that adds up to Sake calories. Think about what you eat when drinking Sake.

When you’re getting drunk, you tend to want more. Just one more glass, you tell yourself. Because you want to have more fun! or because your Sake is too delicious to stop. You need to set a daily limit to stop yourself from drinking too much.

When drunk, you’re more relaxed. You’re more tempted by fatty food and another cup of Sake. As for myself, I often can’t stop gorging Ramen noodles after drinking, knowing I’ll regret it next morning!

Thus, being drunk tries to lead you to a fatty way. Make sure you control yourself and don’t drink too much.

We Digest Sake Differently than Food

When we drink Sake or any alcohol beverages, our body stops what it’s doing and focuses on burning calories from Sake. Our body wants to get rid of it. Absorbing nutrients and burning fat from food is interrupted.

Also, alcohol is ’empty calories’. It means it has no or little nutrients. Make sure you don’t drink on empty stomach or too much.

How to Drink Sake Healthily

We drink water as a chaser when drinking Sake. The water (chaser) is called Yawaragi Mizu in Japanese. You will get drunk more slowly, and it’ll refresh your mouth, not blunting your taste.

3. Stick to Normal Type of Sake

Nigori zake and Genshu have higher calories and carbs than other types of Sake. Maybe stick to the normal type of Sake if you’re health conscious?

So is Sake fattening? I would say ‘No if you drink Sake in a healthy way’.

Having said that, you can’t expect Sake not to make you fat while drinking heavily. Moderate drinking of Sake has health benefits including inhibiting high blood pressure. Enjoy Sake healthily!

SAKETALK Shop has the largest selection of Sake set for worldwide customers!