Sake Terminology Part 3-What is the “umami” of sake? –

You will be able to enjoy sake even more by knowing the terminologies of sake that you see and hear at restaurants and liquor stores.
This time, we will introduce the word “umami” that is often used to describe sake.

What is “umami” of sake?

A. “Umami” is a component of the basic flavors (sweetness, sourness, saltiness, bitterness, and umami) that humans can feel as a taste. The typical umami in Japanese food are kelp and bonito dashi.
The umami of sake is mainly composed of succinic acid, which is classified as an organic acid, and various amino acids. In the case of sake, it seems that amino acids are generally regarded as the source of the umami.
Amino acids are umami components but at the same time they can cause miscellaneous tastes such as bitterness. Therefore, it seems a large amount of amino acids lead to a “heavy sake”, while small amounts lead to a “light sake”.

How is the umami (amino acid) of sake made?

Amino acids are produced in large quantities during the process by which enzymes contained in malt decompose the protein in rice. Since the protein is contained in the outside of the rice grains, junmai sake with a high rice polishing rate compared to daiginjo sake tends to have more umami.

How should I find sake with a strong umami? 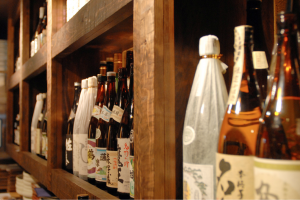 It seems that the most common method is to refer to a numerical value called “amino acid content”, which measures how much amino acid is contained. Generally, most sake falls within the range of 1.0 to 2.0. The smaller the number, the more refreshing the sake with less amino acids, and the higher the number, the more umami and rich the sake. However, it is also true that there are predominantly more Japanese sakes that don’t include the amino acid content on their labels.

However, even if the amino acid content is high, depending on the balance with other values such as sake degree and acidity, it may not be possible to feel the umami, so please be careful.

How was it?
We hope we were able to convey “umami” of sake even a little bit.
We also touch on umami in this article (SNACKS TO COMPLIMENT UMAMI SAKE) so definitely check it out.