Rice used for Sake is different from those we normally eat.

One of the three main ingredients of Japanese sake is rice. However, rice used for sake is different from the one we normally eat. Sake breweries use what is called “Sake Rice (Sakamai / 酒米)”. 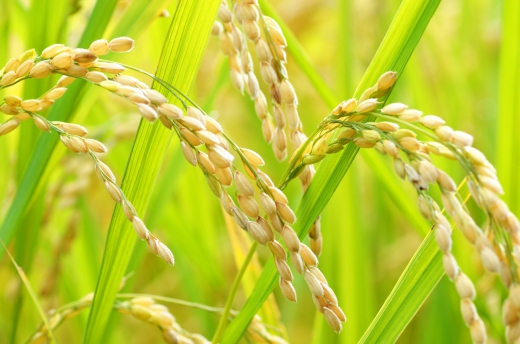 How is Sake rice different from the ‘normal rice’?

In the brewing process, Koji-kin (a type of mold) is added to rice grains to make Koji which converts starch in rice to glucose. Then, in the fermentation process, Koji needs to dissolve in Moromi (mixture of Koji, steamed rice, water, yeasts and lactic acid). Therefore, compared to the rice we normally eat, a sake rice grain is much larger, with less protein and fat which produce off-flavors.

So what kinds of sake rice are used for brewing sake?

There are numerous types of sake rice but the big 4 are;

The former two are the breeds that have existed since before the war (called Okute type / 晩稲タイプ). The latter two are the breeds that were developed for the cold latitudes in the post-war period (called Wase type / 早稲タイプ). The former two are more ripen and juicier, making sake relatively savory and fuller-bodied. The latter two are harder and do not easily dissolve in Moromi, thus giving  clean, fresh flavors to sake. In comparison with Yamada-nishiki, Omachi tends to give “wilder,” fuller-bodied flavors to sake. Of course, it is not only types of sake rice that determine the flavors of sake, but it might be interesting to keep this in mind when drinking sake.

Having said that, the sakes using the types of sake rice grown in the local regions have recently been gaining popularity. For example, Deba-chocho (出刃蝶々) from Yamagata Prefecture and Ginginga (吟ぎんが) from Iwate Prefecture are being in the spotlight.

More ripen and juicier. Tends to be fuller-bodied. Okute refers to the rice breeds that ripen slowly

Origin: Okayama Prefecture at the end of the Edo period (1866).

Characteristics: Tends to give sake complexity and wilderness. Its cultivation is so difficult that it was a rare breed at one time.

Characteristics: King of sake rice. It has the greatest market share due to its perfect characters for sake rice. Tends to give savory flavors to sake.

Grains are bit hard and do not easily dissolve in Moromi. Tends to be clean and fresh sake. Wase refers to the rice breeds that ripen quickly.

Chacteristics: Large grains with the large inner part that is close to pure starch. Tends to proce clean, fresh sake.

Origin: Developed as a mutant in 1978 when a rice breed called Takashi-nishiki was radiated at Nagano Agricultural Test Center.

Characteristics: It’s a hardy breed that is widely cultivated in Tohoku District (northern part of Japan). Tends to produce clean sake with smooth texture such as Junmai Ginjo.

・ Large grain, with the large proportion of the inner part that is close to pure starch.

・ Does not easily get cracked, especially when polished

・ The proportion of protein and fat is small.
・ Has good absorbency and water retention
・ easily dissolves in Moromi so that starch is easily converted to glucose