SAKE MADE BY KIMOTO METHOD 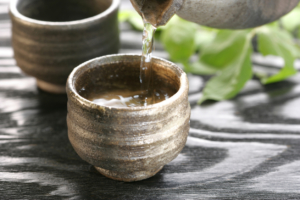 If you hear sake, there are lots of types such as sweet, dry, or namachozo (live storage sake).

Sake is classified by a difference of the method to produce or preserve and of water or rice polishing rate, which is the ingredient of sake.

Here, I will show you sake made by the most traditional sake-making method,

which is called ‘KIMOTO-ZUKURI,’ among lots of types.

Please find your favorite from sake for beginners,

which you can try easily, to the one for pro sake lovers.

This brewery is so famous; we can imagine DAISHICHI SAKE BREWERY when we hear Kimoto method.

Complex umami that is unique to Kimoto method spreads in your mouth and the aftertaste is so clear that you wonder if you really tasted the complex umami.

The smell through your nose is not bad, and you will want to breathe deeply.

I’m sure this is sake with firm strength.

so you should try with plain and simple food such as white fish.

And, natural cheese with black pepper is unexpectedly good because of its spicy taste.

This is the top brand of sake in Japan. Its image is a strong-taste sake maker,

however, sake made by Kimoto method tastes like medium tanrei (very clean) and medium dry.

If you want to enjoy lighter-taste than firm umami or complex-rich-taste, I recommend you this sake.

It is reasonable and easy to get, so you should try it even if you have never drunk sake.

This sake is tanrei a little, so I recommend you to drink it while eating sashimi of a little fatty tuna (Maguro).

Perhaps it is easier to drink casually with a meal.

This sake got the best gold prize in Kanzake (warmed sake) Competition;

it can prove this sake made by Kimoto method is good for atsukan (hot sake).

As soon as you keep it in your mouth, you feel its taste so strong that you can experience high quality umami.

This is made by Kimoto method to be aged for so long time that everyone accepts it as the best sake without zatsumi (unfavorable taste).

You can drink it cold but please enjoy atsukan and feel its quality of the best gold prize in Kanzake (warmed sake) Competition.

You can taste round, mild, and sweet flavor better than drinking it normal temperature.

As for wine, it may be called full body.

Its taste is so strong that you can enjoy it very much with thick taste meal.

I recommend you to eat imo no nikkorogashi (cooked potato) or cooked flat fish with sugar and soy sauce while you are drinking.

Sake of this Sakagura (sake storehouse),

which has firmly kept producing sake made by Kimoto method since its establishment up to the present,

has never been flown by epidemics with times. Once you keep it in your mouth,

its complex umami and rich flavor spread inside, however, it tastes sharp.

Aftertaste is as if you drink nothing, so you cannot stop your hand carrying the glass to your mouth many times.

You should drink it with nurukan (approximately same as body temperature) on a day you can relax.

How about the time when you want to feel the flow of time precious?

I recommend you to eat something so sweet such as kuromame no nitsuke (sweet black beans) with this sake.

The taste is too different between sake with normal temperature and the one with atsukan. You can enjoy in various ways.

This is made by Kimoto method in severe cold region where you can see diamond dusts in winter.

The weather is so cold that the water of melted snow is the best quality ingredient of sake.

The feature of Kimoto method is a soft taste, anyway.

This is dry but not sharp and no zatsumi (unfavorable taste) so that you can keep it in your mouth and drink it smooth.

I recommend you to drink it with sazae and hamaguri (each is shellfish) because this sake taste fine to drink smooth.

You can enjoy the difference between chewy shellfish and smooth sake.

As the name of Karakuchi indicates dry,

this is medium dry sake with refreshing taste among sake made by Kimoto method.

You can find its crisp finish anyway as if it is going down smooth through your throat and also you can feel good length umami after drinking.

I think this is familiar sake for someone who doesn’t like the sweetness of sake.

Let’s enjoy feeling the unique aroma of Kimoto method when it goes through your nose.

The taste is not too strong as sake itself, so you should drink with Japanese cuisine of course and also thick-taste dishes.

Chinese cuisine unexpectedly goes well with this sake. You should drink it with a meal, anyway.

What on earth is Kimoto method? 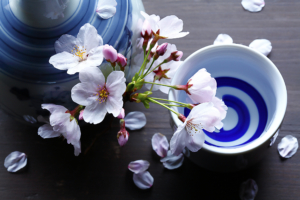 1: The traditional method to make sake

Do you know how to make sake? Shortly, it is defined that sake is basically made by fermenting rice, rice koji,

and clean water, and by filtering them. ‘Yeast’ is used for fermenting these 3 ingredients, and all the process,

to make or to increase the yeast, is called ‘Shubo’ (fermentation starter).

‘Shubo’  used to be called ‘Moto’ long time ago.

2: To use Natural lactic acid bacterium

For sake making, a large barrel is necessary, however, it is not yet used in the process of Shubo I showed you above.

That is only a phase to increase yeast, but ‘lactic acid bacterium’ is necessary to increase the best yeast.

This lactic acid bacterium is actually so important to get rid of microbes and unwanted bacteria which are coming in from the air.

Liquid lactic acid bacterium is now on the market so the process of Shubo is finished when yeast and this liquid.

This is called ‘Sokujo-Moto,’  the popular method after the World War II, which had developed in Meiji era.

Then how did they do when lactic acid bacterium was not on the market?

Sake makers were grinding the rice which work was called ‘Yamaoroshi,’ and they were waiting for a long time until lactic acid bacterium was growing.

During waiting, other many microbes were also growing, and this is a base of the complex taste. 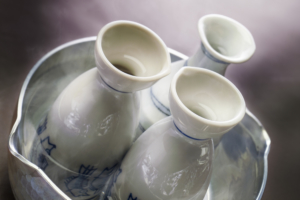 1: How to make atsukan

Sake made by Kimoto method basically gives the complex umami and the good aftertaste.

One of the features is that you can enjoy it in various styles such as cold sake,

normal temperature sake, nurukan, and atsukan. Only one thing to be careful is the taste is different by the way to warm.

I will briefly show you how to warm sake.

Make sake warm in hot water. Sake must be put in Tokkuri and put the Tokkuri in the middle of a pot.

Make sake warm by raising a temperature gradually from water.

Pick up the Tokkuri out of the pot when the temperature becomes fine for your favorite.

It is not easy but you cannot lose a favor of sake and can make delicious atsukan (hot sake) with good and fruity aroma.

2: The names by the temperature

It is one of Japanese culture, I suppose, and we Japanese enjoy naming trifling matters, it means, we cannot stay them just phenomena.

Sake has each name by its temperature.

Sake in 0 degree is named ‘mizore-shu, and whenever it raises each 5 degrees,

and atsukan. The hottest sake is defined over 55 degrees, and that sake is named ‘tobikirikan.’

When you have a chance to drink sake, please use these names, indeed.