While it is said that wine originated before 8000 BC, the history of Sake started sometime during Yayoi-Period (between 6th century BC and 3rd century BC) when rice farming was introduced to Japan.

Sake was made by spitting steamed rice

At this time, people, ignorant of today’s Sake making process, chewed the steamed rice and spat it, adding water to it, when amylase in saliva converted rice starch into sugar. Then the air-borne wild yeasts convert the sugar into alcohol to make ‘Sake’.

Until Nara Period (710-794), Sake had been cloudy, only roughly filtered through colanders or cloth. However, the law introduced in 967 states the regulations for Sake brewing processes that are very similar to today’s Sake making. By Heian Period (794-1185), the clear Sake, which we normally drink today, was appreciated. At this time, however, Sake was treated as a god offering at harvest festivals and was not available to the commoners.

There were around 30 Sake breweries in Kyoto, the old capital of Japan during Muromachi Period (1336-1573), when the government treated Sake as a crucial tax source and promoted Sake making. This was when the ‘Three-step fermentation process’ (Sandan-jikomi / 三段仕込み), pasteurization and other brewing methods peculiar to Sake were developed. Sake began to circulate, having as high economic value as rice.

In the early Edo Period, Sake was fermented 5 times a year, when Sake breweries found it best to undertake the fermentation process in the winter, taking advantage of low-temperature fermentation. This is the reason why even today, most Sake is fermented during the winter season.

In Meiji Period (1868-1912), the fast brewing method (Sokujo-hou / 速醸法), a modern method of adding lactic acid artificially instead of propagating wild lactic acid bacteria, was developed. The establishment of the national brewing test centre and those innovations have proven that science is crucial to Sake brewing.

In Showa Period (1926-1986), the rapid technological advancement in Sake industry led to the establishment of Sake Classification system. At this time, Sake was classified into first-class, second, etc. 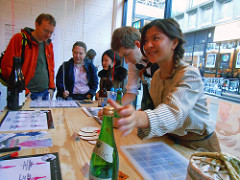 After the war, the restoration of Sake making got a momentum, leading to the revised Sake classification system in 1992. This was when we began to classify Sake into various categories such as Ginjo, Tokubetsu-Junmai, Honjo-zo, etc.

It was not until in the past few decades when Sake gained popularity across the globe, facing a new era of ‘globalization.’