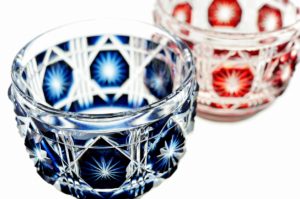 The glass products of Kiriko are still very popular and has got huge fans in Japan.

It shows a unique pattern with cuts when processing the glass. Many of them are mainly being cutting off the corners of cubes.

Satsuma Kiriko and Edo Kiriko. They have cutting techniques respectively and cultural differences

It is an Edo brand glass produced in the late Edo period, and its origin is in Tokyo.

They work on transparent glass using gold bars and files.

Most of the work process is made by hand, and you can see a real artisanship in the process called Tesuri.

Edo Kiriko have usually used a pattern of Palisade, chrysanthemum, hemp leaf etc. which expresses the atmosphere and chicness unique to the Edo,

and its patterns are also used for summer yukata and kimono.

Although it is classical, it has modern and cool impressions,

and the colors are indigo or dark red color in general,

but there are also delicate colors like gray. The texture of the thin glass is a characteristic of them.

It is produced mainly in Kagoshima which used to be called Satsuma.

A decisive difference from Edo Kiriko is that the Edo one is given workmanship on transparent glass,

while Satsuma one is given a finer workmanship (such as octagonal pattern or small dots pattern, etc.) and uses the technique called Irokabuse which using a material covered with a colored glass layer on the surface.

There is also another technique in the process using wheels.

It is said that the Satsuma Kiriko was influenced by Bohemian glass technique so that they have some exotic looking as well.

They have also reflected the culture of its region.

Shochu, which is one of the cultures of alcohol in Satsuma is also very popular among young people as well as Japanese sake and wine. 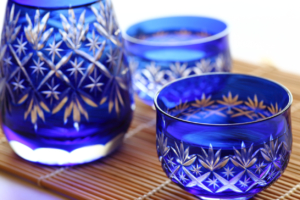 ◆ Satsuma Kiriko is back! What is the charm of Satsuma one which had lived the upheaval period at the last days of the Tokugawa Shogunate

It appeared at the of the Edo period when the Dutch culture just began to take root.

From Kagoshima which used to be called Satsuma from the last days of the Tokugawa Shogunate to the Meiji era, came out many of energetic politicians were active in the politics,

such as Takamori Saigo and Toshimichi Okubo.

In the meantime, Satsuma Kiriko has appeared so quietly but at the same time shining at the end of the turbulent period of the Edo era where foreign cultures circulated in Satsuma.

But in 1863, the glass factory was gone during the Satsuma war,

and the technique of Satsuma Kiriko ended up to cease. Later In 1985, with a support of glass factories,

craftsmen and researchers etc. from among many parts of the country, and succeeded in retrieving nearly after 120 years.

Also in 1989, The traditional handiwork certification was given to the Satsuma glass atelier supervised and under the direct management of Shimazu Limited from Shimazu family.

The thickness of the plump glass layer that Satsuma Kiriko has and the way of how to melt nicely those exotic colors within.

The gradation of the colors is very popular between glass lovers.

Also for those who love the historical politician from Satsuma or the Satsuma’s culture,

the brand-named Satsuma Kiriko is something rare and wonderful glass. 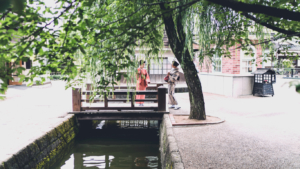 Although the Satsuma Kiriko glass goes well with cold sake, Satsuma is about Shochu.

It is said to be prestigious among shochu, and Satsuma Shochu is a shochu brand which is said to be designated brand producing area.

Sake is made by rice and water are raw materials, on the other hand,

to make Shochu, the raw materials need to be sweet potato, water and so on. It is made by using a distiller like a whiskey.

Sweet potato is exactly the specialty of this land.

This is where the place-name came from. It just brings a special taste to drink Shochu made of its potato with a glass from Satsuma Kiriko.

For the first try, we recommend you to choose a small Satsuma Kiriko that is called Ochoko for the simple reason.

Because if it is ochoko, it is possible to switch later to sake depending on the mood of the day.

And when you get used to it with the taste, you can try big glass cup suitable for Guinomi or Scotch with water.

You can have both ways having a scotch with water or on the rocks.

Enjoy the same way you do with whiskey pouring into the glass. Satsuma Kiriko glass further brings out the taste and aroma of potato that shochu has itself.

If it is red Satsuma Kiriko, it reminds a red color of the potato shochu, and if it is blue color one,

it can bring the feminine image of yukata or kimono in indigo color. So that it is highly recommended. 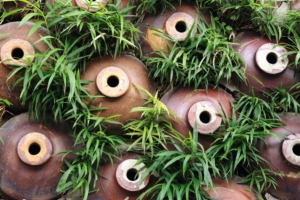 ◆ When you want to taste some energetic atmosphere in sake, try Satsuma Kiriko and Shochu

Although sake has an image of something quiet and mysterious,

the image of shochu is to say passion in a word in Japan. Alcohol content is high and its taste is strong.

you will be able to image the last days of the Edo period in Japan and also the streets of exotic Satsuma.

Shochu is also very delicate. It will be no doubt that sake will be spread over the throat by choosing the right cups. 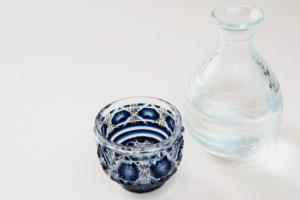