Kanpai. It’s a mandatory etiquette to make a toast in Japan. Don’t start drinking before saying cheers, or you’ll be considered rude. This etiquette of cheers applies to all types of alcohol beverages – Sake, beer, wine and all other sorts. 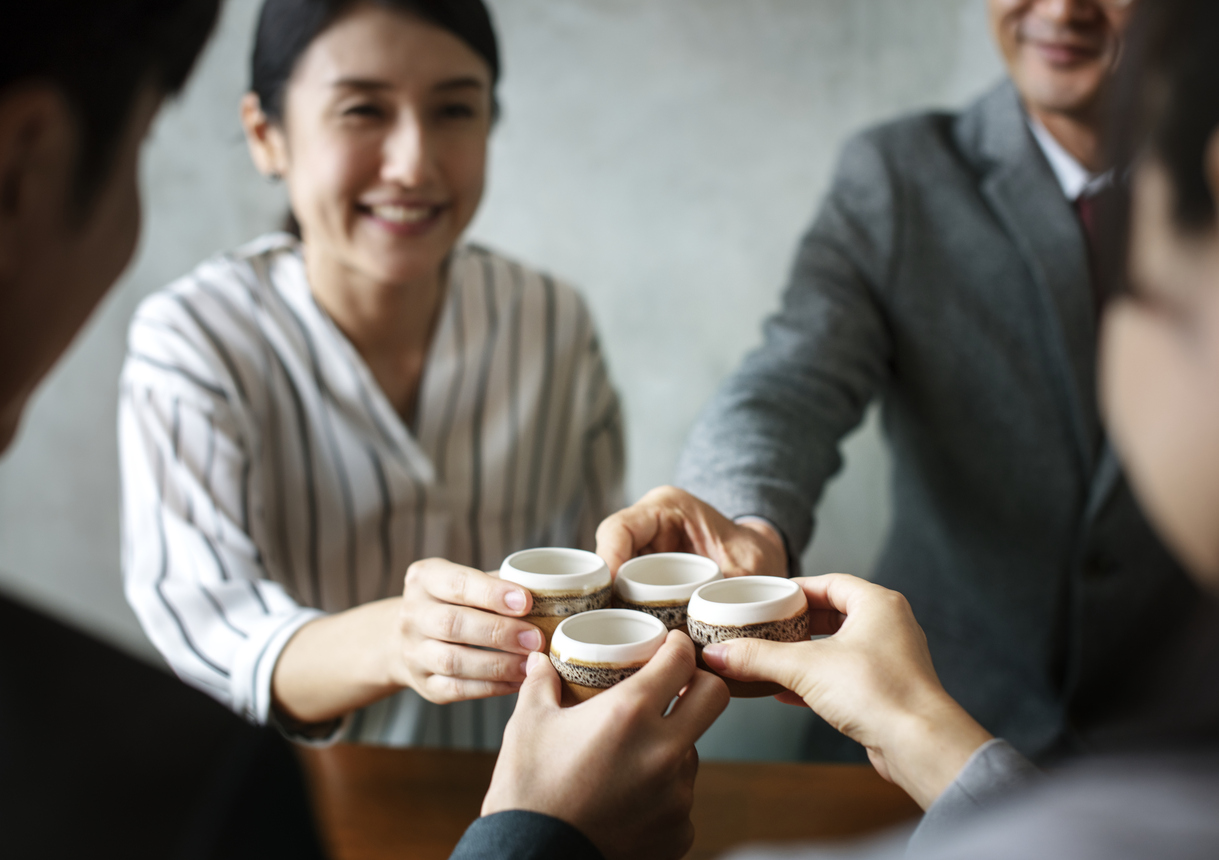 How to say Cheers in Japanese?

We say ‘KANPAI! (乾杯!)’. It literally means ‘dry the glass,’ similar to ‘bottoms up’ in English.
But you don’t have to drink it all at once as the word suggests (it used to be the case in olden days though). Rather, when it comes to Sake, the virtue is to take a just sip of it rather than empty the cup like drinking a shot. Gulping Sake gives an impression that you don’t appreciate the taste of sake. You would be thought to be ignorant of how to drink Sake and just to drink Sake to get drunk.

When it comes to drinking beer, you can just take a sip of it or just drink as much (or little) as you like. Emptying a glass or bottle of beer after Kanpai is not considered rude – but rather probably receives a wow from your company.

‘Otsukare-sama desu (おつかれさまです).’ meaning ‘good job today,’ ‘good work today,’ ‘thanks for your hard work,’ ‘you must be tired,’ or the like. It is a politer or a bit more sophisticated way of saying cheers than Kanpai.

However, Its meaning is not taken seriously, but it’s rather like a sort of greeting phrase. For example, you meet your friend for dinner and you don’t know whether the person has done ‘hard work’ that day, you will say ‘Otsukare-sama deshita,’ assuming and implying that the person has had a hard-work day so he/she deserves a drink. Thus, this phrase is usually used at night to appreciate the other party’s hard work of the day. The casual way of this is ‘Otsukare (おつかれ)’ or ‘Otsukare-sama (おつかれさま).’

Kanpai with your seniors or in business manner

Showing respects for your senior is a virtue in Japan. At a meal, you wait for your senior or boss to make a toast. When the person says cheers, you repeat the phrase to make a toast with one hand holding the glass and the other touching the bottom of the glass. When making a toast, you even bow slightly to show your respect for the person. It’s better to say ‘Otsukare-sama desu,’ which is a politer toasting phrase than Kanpai.

This virtue also applies to business situation. You say ‘Otsukare-sama desu’ or ‘Yoroshiku-onegai shimasu (nice to meet you)’ make a toast to your client with a bow and hands in the same manner as you do to your seniors.

How seriously is this taken?

If your senior or boss takes seniority seriously or if you meet someone for the first time, it’s best to act in the manner above to show your respect. If your senior is a close friend or not fussy about those things, you can be more casual (i.e. saying Kanpai, holding your glass with one hand).

In business situation, these polite manners are mandatory.