Japanese sake with pizza ? A new way of enjoying sake 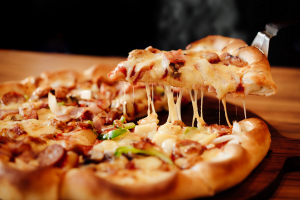 Sake is made of rice, rice malt, and water, so doesn’t it naturally go well with Japanese cuisines with rice as its staple food? It’s fruity and smells nice, but there’s no way it goes well with the very Western pizza – this is what many of you must be thinking.
However pizza in actuality goes very well with sake.
We would like to touch on why they go so well with each other, as well as the recommended types of sake for this combination.

Why do pizza and sake go well with each other?

This will vary depending on what kind of pizza you are eating, so we would like to introduce the sakes in some detail.
For pizzas with relatively thick dough and a rich taste, it is especially compatible with dry ginjo sake and cold sake. We feel that the refreshing and crisp taste of ginjo sake match the richness of the pizza, so that you can enjoy sake and pizza more deliciously.
For pizzas with relatively thin dough and a light taste, we recommend junmai sake and junmai ginjo. The umami, richness and plumpness of junmai sake and junmai ginjo match perfectly match light pizzas.

We have introduced recommendations for sakes that go well with pizza, and just as there are many varieties of pizza, you can say the same for sake.
It may be fun to try out various kinds of combinations yourself and discover your favorite combination.
Why not try it out?